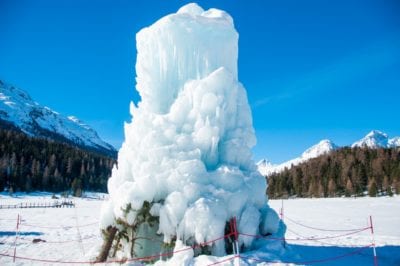 More extreme weather is one of the 6 key global trends that i2O sees affecting its clients in the water industry (along with increasing population size and urbanisation, ageing network infrastructure, an ageing workforce, customers becoming more demanding, and difficulty in increasing revenue and accessing capital). 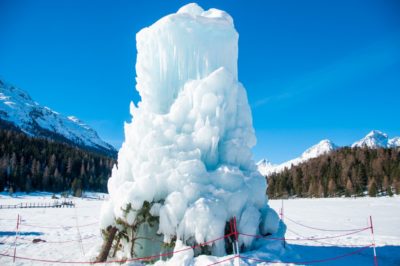 Water supply typically comes from one or more of the following: collecting rainwater, damming a river, pumping from a river, pumping from a borehole, desalinating seawater, and collecting snowmelt. More extreme weather is creating greater challenges for these methods and increasing their cost. In areas of the world that rely on snowmelt, the timing of the melt can be critical to agriculture. A delay of 1 month may make crops unviable.

But here’s a novel solution reported by CNN. An artificial glacier.

A mechanical engineer, Sonam Wangchuk, who lives in Ladakh in India realised that he could pipe and re-freeze snowmelt. He uses gravity to create the pressure required to spray water at night. The water freezes in the sub-zero temperatures and falls, creating a conical shape below. That’s handy because it’s a very efficient shape for minimising melt during the daytime. It can be used at much lower levels than previous methods which involved freezing large bodies of water in canals.

The prototype is 20 feet tall and contains 150,000 litres of water. Some refinements are still required to prevent the supply pipes and jets from freezing.

But Sonam’s ingenuity won him a Rolex Award for Enterprise and around $100,000. Which is the price of a Paul Newman Rolex Daytona; and about 1/10 of the price of a 1942 Rolex Chronograph – only 12 were made, and the last one to be auctioned at Christie’s made $1.16 million.