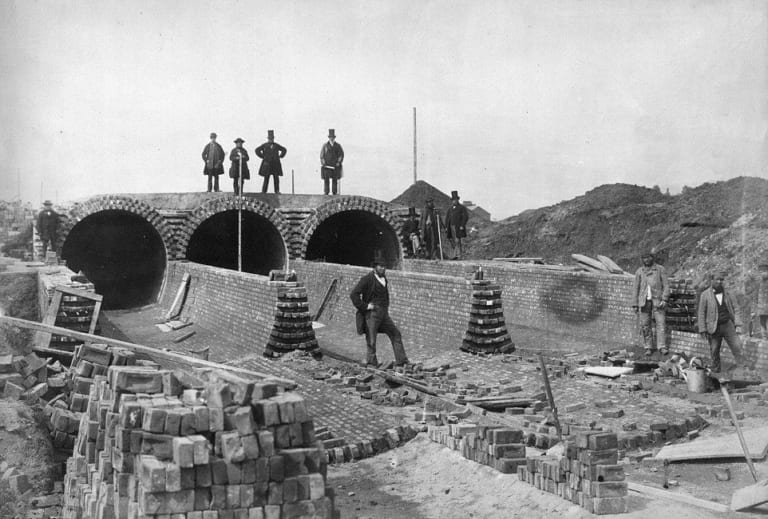 Lessons from the sewers

The question though is why, in a rapidly expanding city, it took nearly 100 years – until 1866 – for most of London to be connected to a sewer network.

The BBC’s Tim Harford argues that sewers are a good which in economic parlance brings a “positive externality.” That is to say that they create benefits which are enjoyed by a third party to the transaction. Goods that have positive externalities tend to be bought at a slower pace than society, as a whole, would prefer.

In the end, it took a crisis and a man with vision to create a sewer network in London. During the early 1800s, London suffered from repeated outbreaks of cholera. In 1853/4 more than 10,000 people (1 in 100) died of cholera. Something had to be done. In 1856, London’s Metropolitan Board of Works was set up. Joseph Bazalgette was elected as its first, and only, Chief Engineer.

Bazalgette’s solution was to construct a network of 82 miles of enclosed underground sewers to intercept sewage outflows, 1,100 miles of street sewers, and a number of pumping stations to take the raw sewage away from the city.

London has depended on this infrastructure ever since. Capacity is only now being increased with the Thames Tideway Scheme.

The government has a role to play by implementing policies that encourage positive externalities. This can be done by providing subsidies or increasing demand.

Advanced pressure management is a good with positive externalities. If it is bought by the leakage team to reduce leakage, then whoever is in charge of energy costs benefits. If it bought by the network team to reduce bursts, then the asset team benefits from extended asset life. Other positive externalities include reductions in operating costs and improvements in customer service. Senior managers should be aware of this and take appropriate action to ensure that advanced pressure management is bought at the pace that will benefit the organisation as a whole, rather than at the pace at which any individual department, left to its own devices, would achieve.