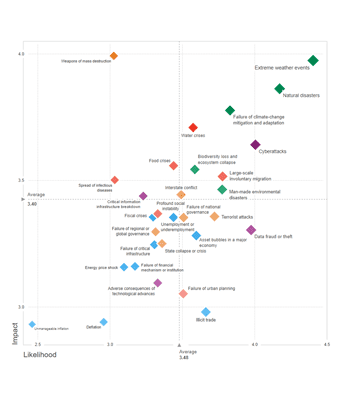 The Global Risks Landscape 2018 from the World Economic Forum places Water Crisis as the 5th highest risk facing the world today. It has been pushed down the list by the increased likelihood of Cyberattacks and Data Fraud or Theft and their potential impact. 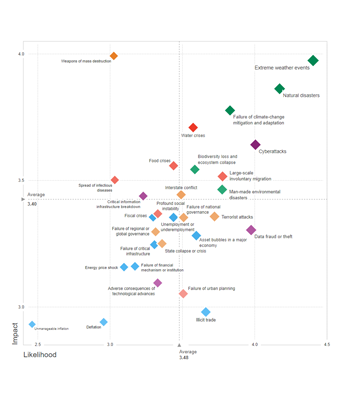 One could argue that the possibility of cyberattacks directed at water infrastructure mean that the likelihood of a water crisis has increased. No longer is it simply a result of increasing and urbanising population, ageing infrastructure and water scarcity, more extreme weather events, combined with a lack of adequate investment. Information security is going to have to be much improved to counter this threat. i2O is ISO 27001 accredited, the gold standard for information security.

Extreme weather events, natural disasters, and failure of climate-change mitigation and adaptation remain at the top of the risk index. All of those make a water crisis more likely. Large-scale involuntary migration is also high on the list. Its drivers are mostly conflict-driven; but a water crisis might well trigger it.

On Monday, ratings agency Moody’s placed Cape Town’s credit rating under review for a downgrade, saying the water crisis was credit negative. The Mail & Guardian reports how the water crisis will affect Cape Town’s two main industries, tourism and agriculture, reducing employment, value creation and tax income. A survey conducted by the Cape Chamber of Commerce indicates that 7% of businesses are expected to shut down on Day Zero (when the city runs out of water) and more than 10% will send their staff home. There must be a high likelihood of social unrest ensuing from a rapid economic unravelling.

i2O’s solutions are designed to help water companies cope better with the challenges they face and buy them time if they ever face extreme circumstances. Deploying our solutions is probably the most cost-effective risk mitigation action that a water company could take to address the risk of Water Crisis.